The 100 Club is a 32,000-member non-profit organization that began in 1953, which provides financial support to the dependents of law enforcement officers and firefighters who are killed or seriously injured in the line of duty in 32 counties surrounding Houston.

We financially support the dependents of heroes killed in the line of duty by paying off their home loan, vehicle loans, credit card debt, and assisting with providing a college education for their children.

We fund scholarships that allow officers to further their education in criminal justice.

We receive 100% of our funding from the generous gifts of individuals and businesses.

We provide funding to replace all service animals who are killed or seriously injured in the line of duty for law enforcement and fire departments within our coverage area.

We are a recognized 501(c)(3) non-profit organization, and your contributions are tax-deductible. Additionally, we receive contributions thorough participation in the Amazon Smile, Kroger Community Rewards, and Randall’s Good Neighbor programs. For more information on how these programs work, see our FAQs page.

Proud members of the Better Business Bureau since 2000. 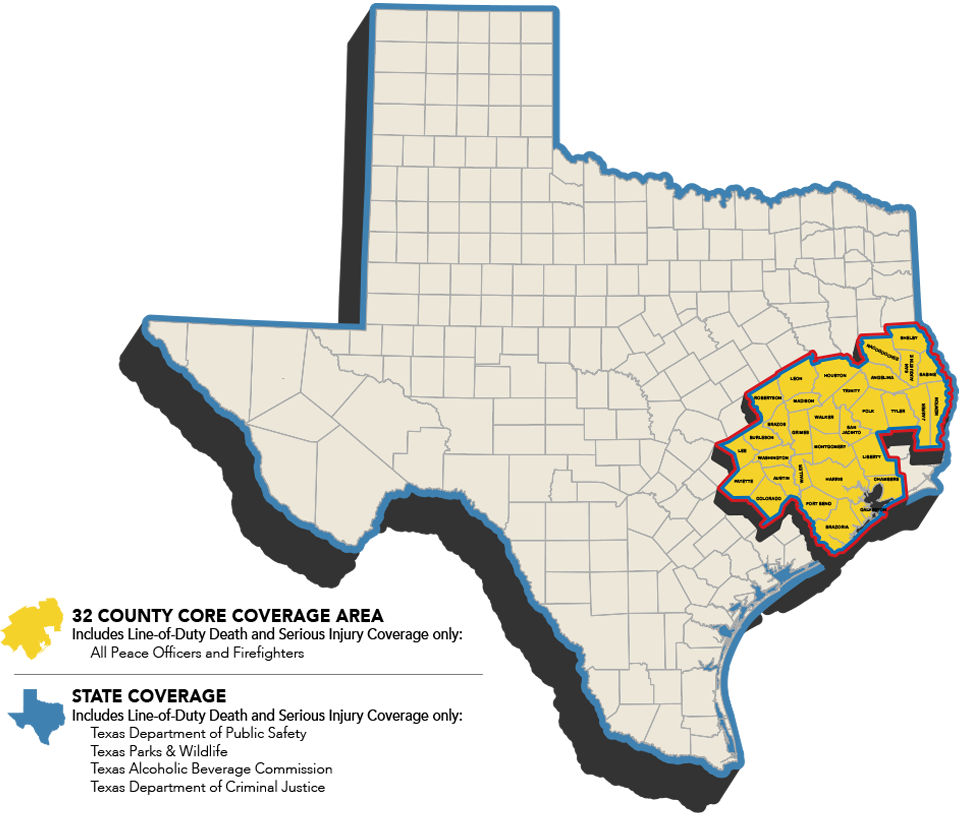 * Expanded counties only include benefits for line-of-duty deaths and serious injuries.

So they reached out and motivated 100 people to contribute $100 each toward the mission. Thus, The 100 Club was born.

For nearly 50 years, the organization focused on police officers, but in 2001, The 100 Club expanded to support firefighters. As new counties have been added and new public servants have been supported, the mission has always remained the same. And today, the organization has grown from 100 humble members to more than 30,000 strong.

$0,778,252
Total amount collected and disbursed to surviving dependents, for special equipment, and for officer education
0
Number of officers who have benefited from scholarships or other educational opportunities
0%
AMOUNT OF OUR FUNDING THAT COMES FROM MEMBERSHIPS AND CONTRIBUTIONS
$0,407,740
Total financial support provided
to help dependents of fallen
officers and firefighters
$0,556,972
Value of life-protecting equipment provided to law enforcement agencies
$0,813,540
Amount provided for officer

Photo courtesy of the Texas Parks and Wildlife Department.